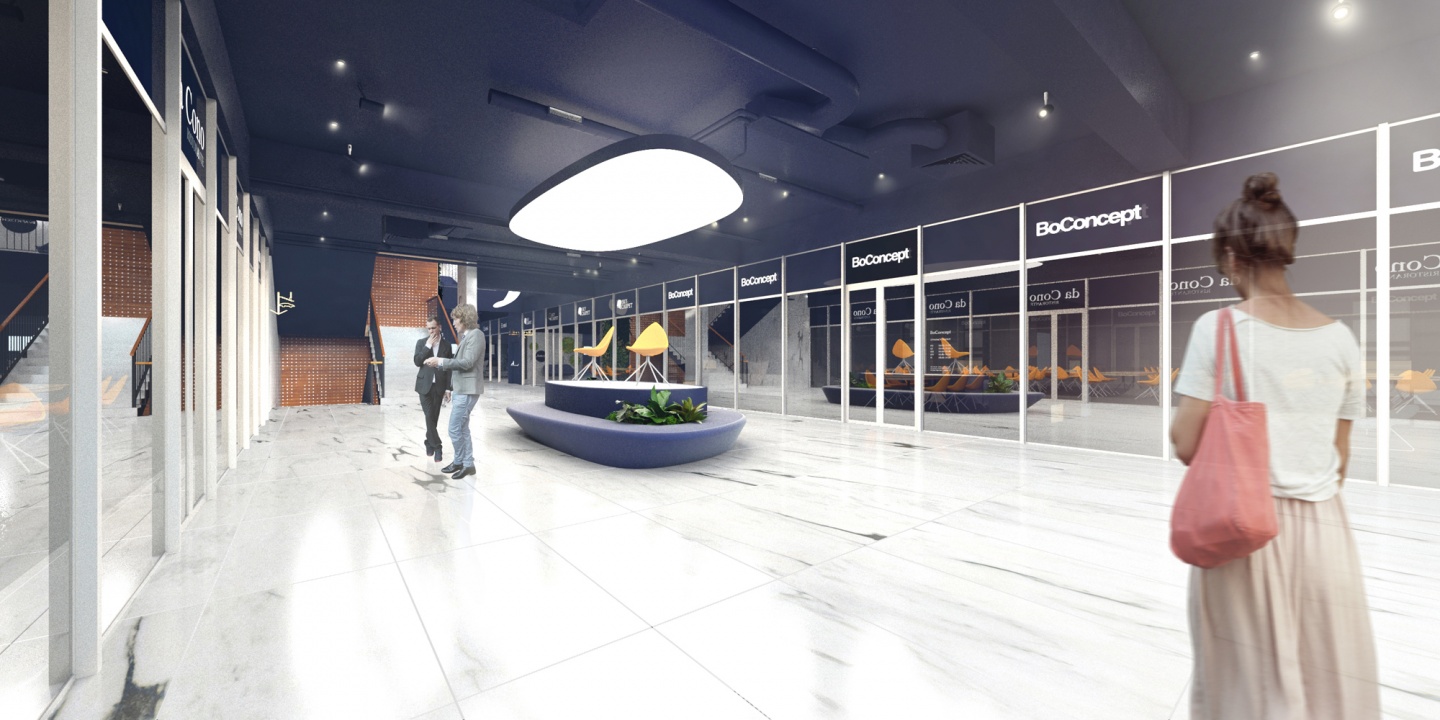 The furniture store Lightpark had a vision to become a designer department store with furniture. Small but unique. However, it is battling on the market with significantly greater competition in demographically stronger areas, such as Petržalka, and even its location in the prosperous area of Rača didn’t add to its attractiveness. The design of its interiors, even award-winning in its time, reflects the year 2007. Ten years without a change to the interior left it with many non-conceptual individual entrances, where, in addition, the thundering interior design denies the individual business premises, engages the visitor and his senses too much, and he gets lost in it.

A diamond on the market, small but unique, should really be a jewel. Our concept was the re-clothing of this violently gaudy interior into one of light luxury and integrated noblesse. The central motif is the concept of an offset kinetic flower, put into the atrium, made of a Barrisol semi-transparent membrane, underlit by a system of LED-lights with RGB control, where the individual flower petals can be moved into various positions using small motors, until they again meet and create the flower blossom. The neighbouring communication core of the lifts, clad in a provocative red with an Asian structural motif and surprising moment of teakwood cladding in a nearly Tatran profile, is used for placement of a vertical garden which adds the needed life to the interior. In an effort to protect the wooden cladding, which by being situated on the staircase landing communicates with the visitor the most, it was revitalized and supplemented by graphic leaves in the form of hemispherical items. The greenery, however, is not limited only to the level of the vertical garden but is also integrated in the framework of a made-to-measure organic form of the designed element for seating in the entrance hall, which will also serve as a large exhibition space. The exaggerative solution of all vertical surfaces and ceilings is unified into a darker shade of luxurious Parisian blue, on the background of which the grace of white ceramic cladding and tiles with marble patterns stand out, in addition to the bright interiors of the commercial spaces. With the new information system on the walls and ceilings of fixed gilded elements with icons, a part of which will also include a made-to-measure circular orientation boards, a visitor will rapidly find his way around and will have the desire and the will to look through the entire department store, since nothing will disrupt or slow him down on his path. Given the redesign of the whole interior, this path should be exciting and inspirational for the visitor. Lightpark should be perceived as a unified work, which is intended to be seen as a whole.  We believe that this concept will bring Lightpark the desired success and will carry it to the top spot on the market. Lightpark as small but uncompromising.